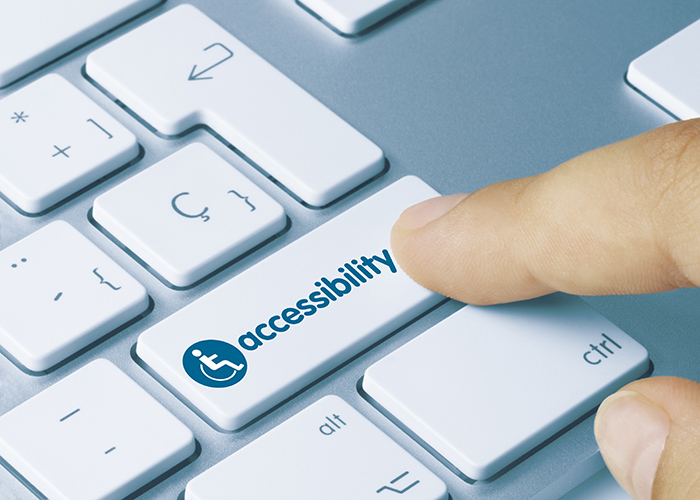 Let’s set the stage for what we’re discussing.

According to the data of the 2016 American Census surrounding disability, about 39 million civilian noninstitutionalized Americans self-report as disabled. That’s 12% of Americans who are out and about and living among us day to day.

In 1990 Congress passed the Americans with Disabilities Act (ADA). In short, it is a civil rights law addressing the needs of people with disabilities, prohibiting discrimination in employment, public services, public accommodations, and telecommunications. All state and federal government offices, educational, and healthcare institutions are expected to comply with the law, as is an organization that works with them.

What is a Disability?

So let’s define what a disability is. For most people what comes to mind when disability is mentioned are deafness, blindness and being in a wheel-chair. Although all of those are true, for the purpose of accessibility disability is all those and people with colorblindness, mobility issues, and cognitive difficulties among other things. And it runs the gamut from the person who has had to deal with a disability from the moment they arrived on this planet to the person who is temporarily inconvenienced.

So, What is Accessibility and Why Should We Care?

In a nutshell, accessibility is altering or creating environments and tools that are easily used or accessed by the disabled population. In the realm of telecommunications that includes websites, social media, videos, and electronic documents.

I’ve been asked often, and so I’m sure some of you have already thought it. “Sure, it makes sense that the government has to comply. But why does it matter to everyone else and what does it do for me?”

No matter how you do the math 12% of just over 300 million is a fair amount of the population, and those are just the ones that self-reported. That means that there are even more out there that haven’t identified themselves, and some who don’t identify themselves that way. Like who? How about the person who just broke their arm and now they’re in a cast while they heal? Or the person who is suffering from a concussion currently and, although they’re expected to recover, is just having a hard time with colors or reading at the moment? They are disabled for a short time, but they wouldn’t count themselves among the disabled community at large. In any case, though, that is 12% of the population that can’t buy your product, take your course, learn more about your services, or research your organization/company and you miss out on them.

Also, did you know that companies like Google will actually give sites that are set up for accessibility higher rankings on searches? The more accessible you are, the better your site will perform. And that’s just the start of the reasons why you would benefit from taking steps toward accessibility.

Digital Accessibility isn’t a quick and easy process, especially if you’re already branded and your site or channels have been up for awhile. But the best way to start is to do some of the small things. Among those:

Other things you can do if you want to dig in more:

Accessibility is important. Right now we live in a time where there is a lot of division. If we can start finding ways to include those who should never be excluded, isn’t it just right to do it?